Over recent decades, growing agricultural competition has spurred the development of modern harvesting machines whose remarkable efficiency entails an exceptionally rapid speed of travel. Harvester speeds may exceed 4.1 m/s, and cutter bars can reach 14m or more in length. Although it is very difficult to assess the extent to which wildlife populations are affected by agricultural operations, it is indisputable that new harvesting machinery has a negative impact on local fauna. The number of animals killed or injured during routine agricultural operations has increased dramatically since the introduction of modern harvesters.

This text documents an experiment we executed to apply UAVs equipped with thermal imaging cameras to the search for roe deer fawns just before the harvest season, when young fawns are most vulnerable.

We placed five-litre plastic containers randomly across a five hectare, high-grown alfalfa field as test items. The containers had an approximate size of 30×40×20 cm. We then filled the plastic containers with water heated to 17 to 25 °C, which corresponds to the approximate temperature of a fawn’s surface. Our test flights were performed in the early morning (5–7 a.m.), which is the timeframe in which farmers would typically search for roe deer fawns. The UAV pilot explored the entire field according to the flight plan (see Fig. 1). 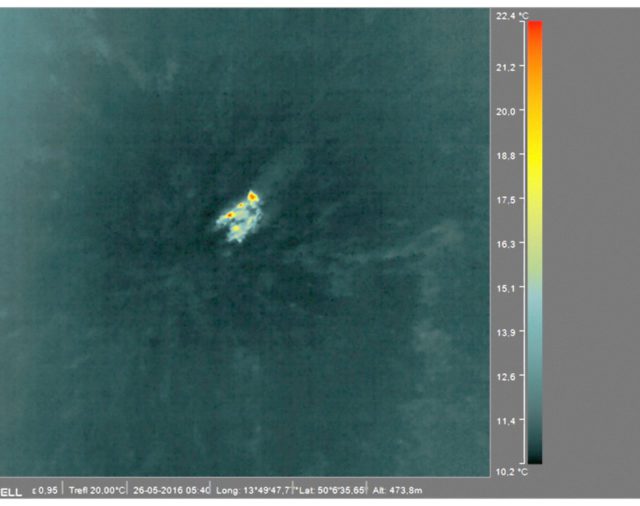 Our experimental game utilized the LWIR (long-wave infrared, i.e., wavelength of 7–14 m) Workswell WIRIS 2nd-gen thermal imaging camera. The thermal camera we selected has a lens of focal length f=13 mm (corresponding to a FOV of 45° × 37°) and a micro-bolometer resolution of 640×512 pixels. The camera records surface temperatures within the range of −25° C to +550° C, and the accuracy of the recorded temperature as stated by the manufacturer is ±2° C, or 2% of the range, such that the lowest-quality data still falls within the given interval. As far as thermal sensitivity is concerned, the camera delivers  ≤50 mK at 30° C. The total weight of the thermal camera is approximately 400 grams. In addition, the camera has 32 GB of built-in memory and HDMI for video output. Video can also be transmitted in real-time to the ground station via wireless technology, which we relied upon for our game. An appropriate UAV speed of flight over the monitored site is also important. For our purposes, the ideal flight speed ranged from 4 to 6 m/s, with a 4.6 m/s average. Any higher speed would limit the user’s ability to scan the images. Furthermore, a slower flight would significantly reduce the scannable area due to the unit’s limited battery capacity. The imaging frequency of the UAV thermal camera ranges from 9 Hz to 30 Hz. For our purposes, 9 Hz was sufficient.

A key feature of the WIRIS thermal camera is its ability to integrate GPS data and accurately store the GPS position of any localized object. This makes it easy to monitor and mark the locations of roe deer fawns with GPS coordinates. The flight trajectory can be planned ahead using software such as the DJI Ground Station app (Fig. 3). The application allows users to estimate the expected flight time, which is very important, especially given the limited battery life.

The UAV pilot had no knowledge of the position of the containers. For each test flight, only one plastic container was placed in the field. The decisive criteria were the successful detection of the test items, and the size of the scanned area.

UAV-mounted thermal imaging cameras are expected to significantly reduce the mortality of roe deer fawns. Our field flights confirmed a 100% success rate of roe deer fawn detection on the scanned field. We foresee the major limitation on the efficacy of this method coming from human error, as the unit’s technical performance did not indicate a possibility that equipment would be the source of failure. This is, of course, in the case that the preconditions for successful detection are fulfilled. We recommend an optimum flight altitude of ±40 meters above the terrain during early morning hours with sufficient temperature contrast – appropriate camera resolution is, of course, essential as well.

An undisputed advantage of our approach lies in the fact that this method can be implemented by gamekeepers before the fodder crops harvest. Therefore, it does not interrupt the flow of agricultural operations, which are often precisely planned in accordance with climatic conditions and crop ripeness.