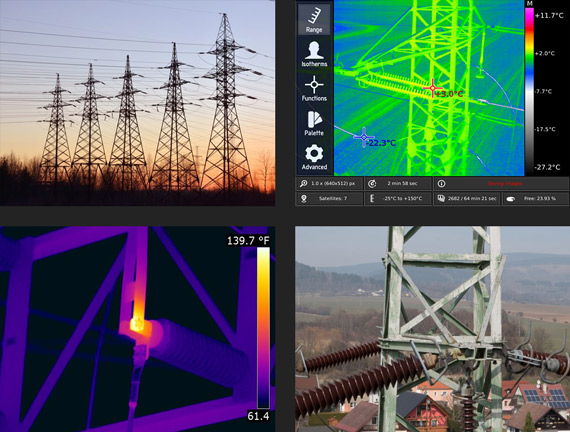 Thermodiagnostics in the power engineering sector

It’s almost impossible to imagine life without electricity. Yet even though almost every aspect of the modern world depends upon it, it’s all-too-easy to forget how demanding it is to produce and supply electric power for daily consumption. After all, transmission and distribution networks are highly complex systems of interconnected energy sources, and they don’t run on their own. When failures occur within electricity networks, they can lead to blackouts, or worse – destructive fires. Advanced thermodiagnostic tools have an important role to play in the prevention of these disasters. One such tool combines cutting-edge thermal imaging systems with the UAV, or drone, to give advance warning of a potential problem.

Flat roofs were originally built in areas with low rainfall. For example, they can be found in the architecture of Egypt, Babylon and Mesopotamia. They appeared in Central Europe with the discovery of asphalt strip processing at the end of the 18th century. In the modern era, the quality of insulation against atmospheric conditions made drastic improvements, and flat roofs appeared on factory halls and earned acceptance within architecture. Today, they are a standard component of a wide variety of buildings. Flat roofs conserve material, are less labor intensive, and facilitate variable roofing layouts, as well as the potential use of roof areas. However, flat roofs also have disadvantages. The design of the roof layer composition is a complex matter, as is the structure’s thermal technical evaluation, and rigorous principles must be adhered to during implementation. Thermal imaging systems provide the perfect tool to evaluate the technical condition of flat roofs. 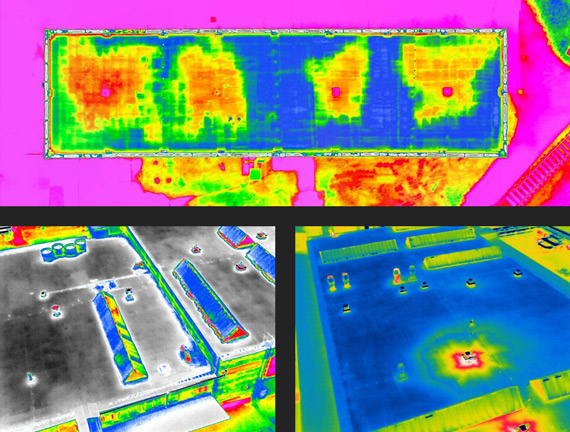 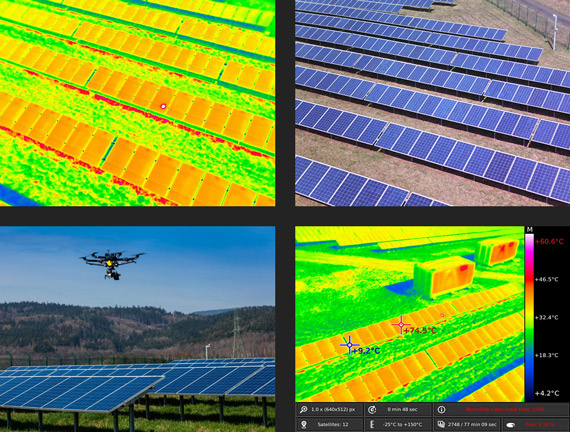 The worldwide increased knowledge of the environment and the risk of exhausting non-recoverable energy sources is a reason that various methods of using alternative resources have been sought. Solar energy is an inexhaustible source which, thanks to the programmes for the support of the construction of solar power plants is most often used. The need for problem-free operation of such a power plant is high-quality assembly, as well as regular maintenance and inspection of all panels. A fast, cheap and reliable method where it is possible to check the quality of a large area of solar panels is thermodiagnostics using the Workswell WIRIS thermal imaging system attached to the drone.
More information

Using the UAV Thermography for Cultivation and Phenotyping of Crops

The process of cultivation leading to the target properties of new crop varieties is time-consuming due to the need to characterize a large number of potential gene resources. Genetic resources of minor crops are tested in three-year seed-beds with elementary evaluation according to the applicable methodology of work with collections of genetic resources. The genetic resources evaluated include winter and spring wheat, winter barley, both forms of triticale’s, vain types of Hordeae and many more minor crops.
More information 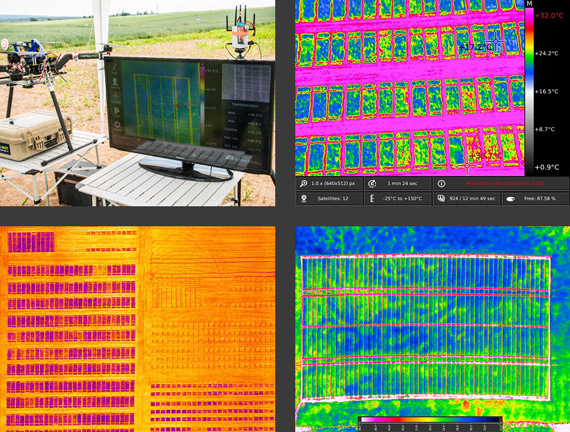 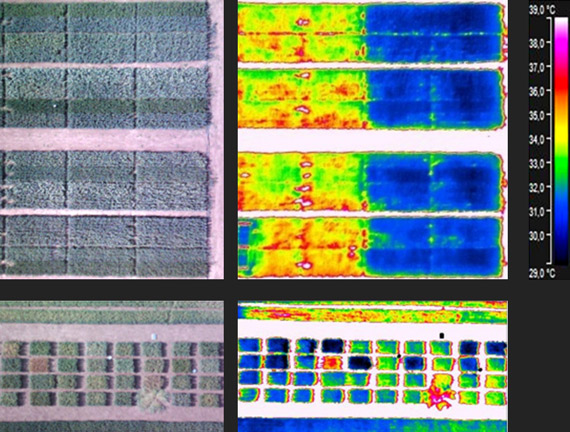 Detection of Water Stress in Cereals Using the UAV Thermography

Availability of water for crops and their resistance to shortages during growth affect the overall yield, quality and profitability of field production in changing climate. Plants affected by drought stress close their stomata, the process of transpiration that cools vegetation gets down and the surface temperature of the leaves increases up.
More information

CONDOR Solutions carried out a new inspection of the fakel burner in the facility of Lunskoe OPF in October 2016. The facility is owned by Sakhalin Energy whose major shareholders are the companies Shell and Gazprom. The facility of OPF is in the Northeast coast of Sachalin island Russia. It is located 7km inland, at the place of influx of the gas-pipeline from the platform Lunskoe A. The entire facility spans more than 62,000 m².
More information 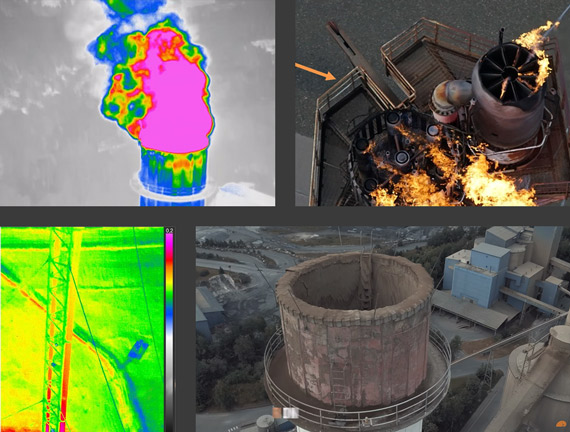 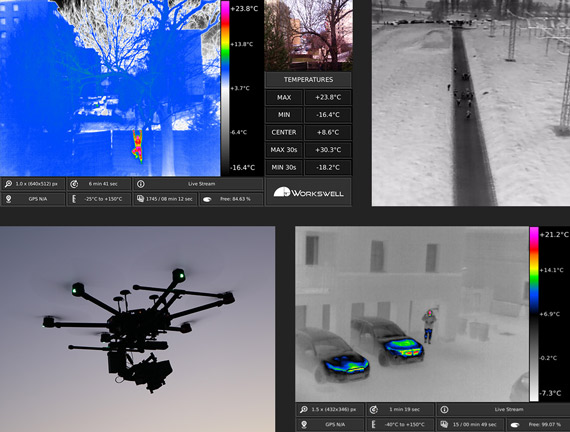 Today, security is an expression that is very common in all areas of our lives. Security measures, security risks, security cameras, etc. ensuring the security of loved ones, staff, the city’s population, animals and possessions is a priority for most of us. It is not easy task and, unfortunately, is not something that can be resolved forever. We will always have to resolve it again and again, because new security risks will always arise. The most frequent source of fear is the risk of entry by undesirable people (or animals) into buildings and onto land. An analogical problem is the search for missing persons in particular areas.
More information

Pipeline – this is defined as a “special form of transport used to transport liquids (i.e. liquids and gases), or liquid mixtures with solid particles”. The issue of thermographic pipeline inspection applies to long-distance piping systems supplying variable media with a temperature different from the temperature of the surrounding atmosphere. By using thermographic systems, it is possible to determine and localize defects to pipeline insulation and leaks of the transferred media. In some cases, leaks can even be determined and localized in underground pipelines.
More information 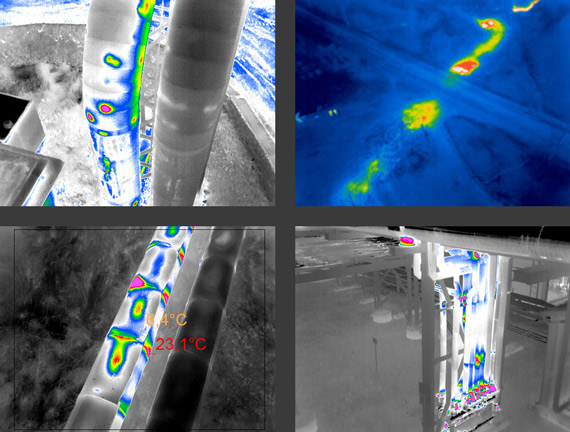 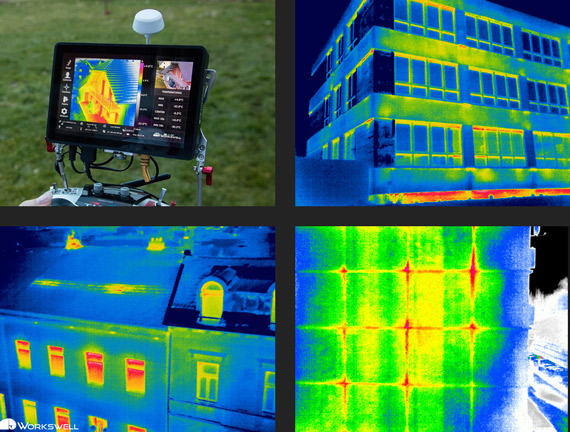 Thermographic diagnostics of buildings was one of the first areas where thermography was commercially used in the 1960s. A thermal camera can discover several construction defects that cannot be seen by the naked eye at the beginning and may only become obvious after some time when the building starts to degrade. The most frequently discovered problems relate to thermal bridges, water leaks and air proofing.
More information

For several decades thermal cameras have been an indispensable help for fire fighters worldwide. The LWIR thermal camera does not record visible radiation but long-wave infrared radiation that penetrates smoke much better. It can search for the centre of a fire, as well people lost in the smoke or fog. A thermal camera together with a light and easy to control drone can be a very useful tool for rescuing people.
More information 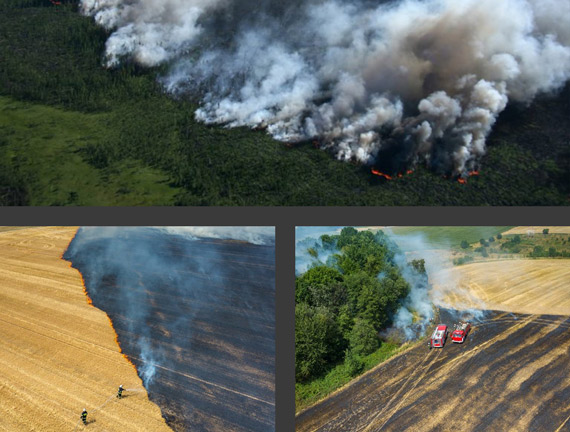 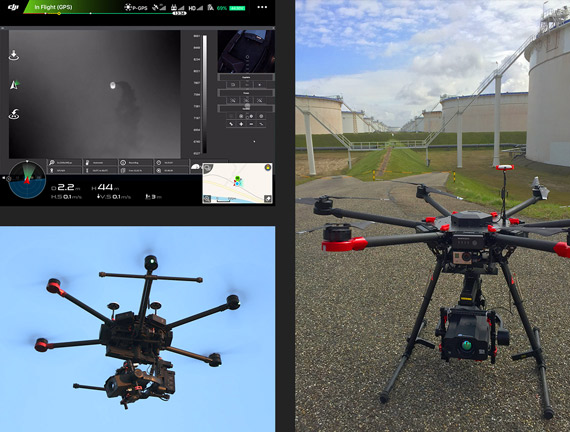 Thermal cameras can efficiently detect (visualize) gas leaks that are hazardous for the environment and the health of people. The principles of detecting gas using thermal cameras is based on the fact that some gases in selected spectral zones behave as selective radiators with low throughput and reflectivity (and high emissivity) and under certain circumstances they can be easily observed by a thermal camera with sufficient temperature sensitivity and the correct spectral range. Special LWIR and MWIR thermal cameras were developed to detect (leaks) of gases, including, for example, the quite problematic gas SF6, which is 24 000 x more hazardous for the environment than the greenhouse gas CO2.
More information

Photogrammetry, 3D mapping and 3D modeling are standard post-processing tools, helping presentation and visualisation of captured aerial data. With our thermal camera Workswell WIRIS Pro, you can offer this kind of presentation to your customers and colleagues. Captured radiometrics data could be presented as 3D models and orto-photogrammetics pictures. We also offering a special software for mass thermograms pre-processing (i.e. mass data processing) called Workswell ThermoFormat, which significantly saves time when preprocessing a large number of images for mapping and modeling software. Therefore our data format is compatible with Pix4D and Agisoft. Which are the best known software in this area.
So we also offering our thermal cameras in bundles with Pix4D and Agisoft. 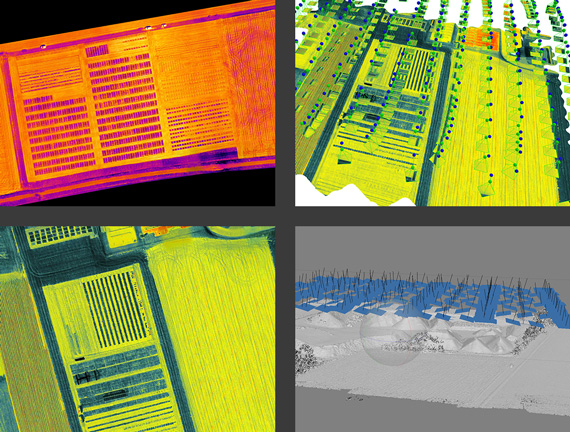